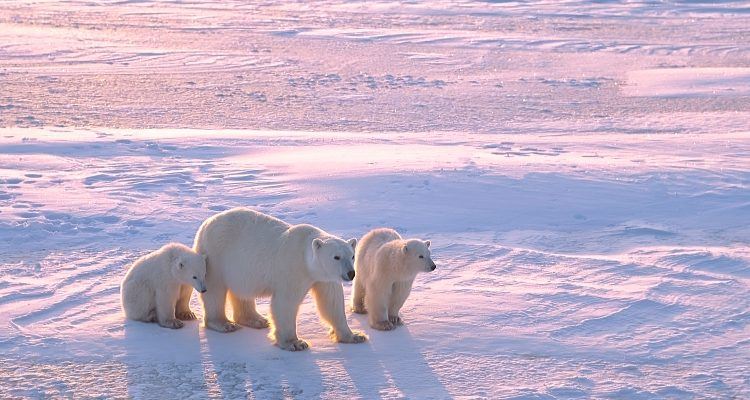 1. It’s not a continent
The Arctic, which encompasses everything north of the Arctic Circle, is actually eight different countries: Canada, Finland, Iceland, Norway, Russia, Sweden, the United States and Greenland (which is part of Denmark). So although the Arctic covers an area of over 5 million square miles, it’s not actually a continent in its own right. And because it is predominantly a vast frozen ocean, a voyage aboard one of our PONANT Expedition ships, specially designed for polar exploration, is by far the best way to experience it.

2. There are two North Poles
As anyone who has ever tried navigating a boat will tell you, Magnetic North – where a compass points to – is actually some distance from True North which is at the precise northern axis of the Earth’s rotation. But of course, aboard one of our polar vessels, in the capable hands of our highly qualified and experienced crew, you won’t have to worry about finding your way around!

3. There are no penguins in the Arctic
If you want to see penguins, the Arctic may be a bit of a disappointment! However, if you want to see polar bears you’re in the right place. And because you’ll be accompanied by a National Geographic expert, you’ll have the best possible chance to spot one of these iconic and unique creatures. There is also plenty of other arctic wildlife to see: seal, reindeer, narwhal, musk ox and arctic foxes as well as many species of seabirds.

4. More of the Arctic is sea than land
The majority of the Arctic is ocean, and during the winter months, largely covered with ice. So a polar expedition cruise is by far the best way to explore this pristine white wilderness. Like all National Geographic expeditions our polar adventures originate from the idea that when people understand the world, they care more deeply about it and are inspired to protect it. Our expeditions are designed to encourage our guests to become global ambassadors for sustainability.

5. At the North Pole, the sun only rises and sets once each year
If you lived at the North Pole, you’d have to wait a very long time between sunrise – which is approximately on the 21st March – and sunset in late October. Happily, most of our Arctic expeditions mostly take place during the summer months when the long northern days allow you plenty of time to appreciate this incredible, unique part of our world.

6. Over four million people live within the Arctic Circle
Despite the harsh climate, many areas of the Arctic have been settled for thousands of years. Indigenous peoples include the Saami in Finland, Sweden and Norway, the Nenets and Khanty peoples in Russia, and Inuit in Alaska and Canada. Our polar expeditions will give you the opportunity to discover some of these ancient cultures, and understand how they have managed to make a living in this inhospitable part of the planet. And, as with all our expeditions, when you travel with us, you give back. Simply by taking a trip with National Geographic Expeditions, you’ll be supporting the National Geographic Society’s explorers and researchers in their continuing work to conserve our precious environment, in the arctic and around the globe.

7. The shape of the Arctic Ocean is constantly changing
During the Arctic summer the area of ice that’s floating on top of the Arctic Ocean shrinks in size and vast towering icebergs break away from around it. These sculpted, silent mountains of floating ice are one of the most dramatic sights in the world, and their ever-changing colours as they catch and reflect the Arctic sun are sure to have you reaching for your camera. On all our expedition cruises you’ll have one of our award-winning National Geographic photographers alongside you to help you make the most of the astonishing, constantly shifting, scenery. As with all our trips, our expert team of explores, writers and researchers will also be on hand to give you a unique insight into National Geographic’s continuing work to better understand our planet.

You can find all our cruises to the Polar Regions here.