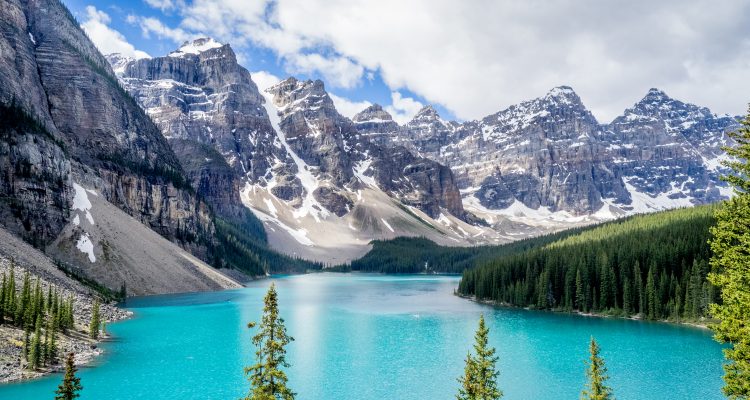 Facts About the Canadian Rockies

At the heart of the Canadian Rockies lies Banff National Park, which became the country’s first national park—and the world’s third—when the government set aside a 10-square-mile parcel of land in 1885. Here are twelve things you probably didn’t know about this spectacular place:

The discovery of a series of mineral-rich hot springs in the 1880s put Banff National Park on the tourist map. In 1886, the Grand View Villa opened alongside the therapeutic waters of the upper hot springs and became popular as a health resort. As the legend goes, its handrail was built with wooden crutches purportedly left behind by “cured” patients.

In 1901, the Canadian Pacific Railway built Lake Agnes Tea House as a hiker’s refuge, perched at 7,000 feet in a hanging valley above Lake Louise. Since 1905, hikers and horseback riders have been able to enjoy pots of loose-leaf tea and freshly baked banana bread while taking in stunning views of Lake Agnes. With no roads serving this mountaintop spot, staff members hike in and out with supplies and trash on their backs. Once a year, a helicopter drops off some 10,000 pounds of flour, sugar, propane, and other dry goods—a feat that takes 20 to 30 trips over the course of one busy day.

You can taste some of the world’s freshest water at the Columbia Icefield between Banff and Jasper National Parks. It’s North America’s hydrographic apex: meltwater from the icefield flows into the Arctic, Atlantic, and Pacific Oceans.

The other cold war

Near the end of World War II, Patricia Lake hosted a top-secret military project to build a ship out of wood, pulp and ice. Intended to help the Allies strike German U-boats far out in the Atlantic Ocean, the ice ship proved seaworthy, but the plan was scrapped—and its prototype melted with the spring thaw.

By any other name

A Belgian Jesuit missionary forever denigrated Maligne Valley, labelling its river the French word for “wicked” after falling off his horse while fording its waters. The river runs into a canyon and lake that now go by the same name. The biggest glacier-fed lake in the Rockies—and the second largest in the world, azure Maligne Lake has also been called Sore Foot Lake, so named by a 19th-century rail surveyor after his own difficult journey in this remote wilderness.

Eyes on the prize

In Jasper National Park, the jagged peak of Mount Edith Cavell commemorates a British nurse who helped Allied soldiers escape German-occupied Belgium during World War I. She was killed by German firing squad in 1915; a year later, Canada renamed the 11,033-foot “Mountain of the Great Crossing” in her honour.

The lakes of the Icefields Parkway are famous for each reflecting a distinctive hue—from turquoise Bow Lake to jade Lake Louise—due to the way sunlight hits fine particles of eroded glacial silt suspended in the water. The colours are most vivid as meltwater reaches its peak in July and August.

The price of beauty

From 1969 to 1979, an image of Banff National Park’s Moraine Lake framed by the snow-capped mountains of the Valley of the Ten Peaks appeared on the back of the Canadian $20 bill. Locals still call the spot the “20-dollar view.”

A primitive arthropod known as an Opabinia was among the 127 or so species discovered in the Burgess Shale fossil depository in Yoho National Park in 1909. With five eyes and a clawed “nozzle,” the bizarre creature got a room full of palaeontologists laughing when the first reconstruction was unveiled.

Discover this magical corner of the world during a unique expedition with National Geographic. Explore all of our Canadian Rockies itineraries today. 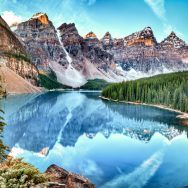 Canadian Rockies By Rail and Trail 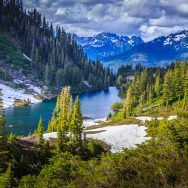