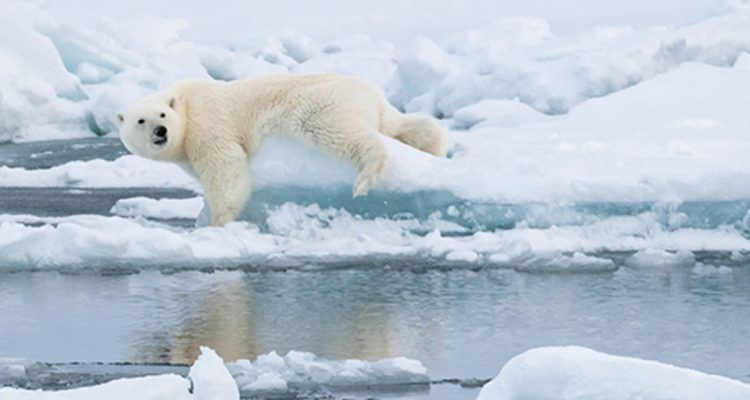 10 INTERESTING FACTS YOU MIGHT NOT KNOW ABOUT POLAR BEARS

For many people keen to visit the Arctic, one of the main attractions is the hope of seeing the king of the arctic, the polar bear, in its natural habitat. Here are a few particularly interesting and perhaps not so well-known facts about these amazing animals, that will only fuel your desire to see them for yourself!

1. POLAR BEARS ARE CLASSIFIED AS MARINE MAMMALS
Because they spend most of their lives on the sea ice of the Arctic Ocean and depend on the ocean for their food and habitat, polar bears are the only species of bear to be considered marine mammals. Their Latin name is Ursus Maritimus meaning ‘Sea Bear’. Polar bears are found in the frozen wilds of the Arctic, in Canada, Alaska (US), Greenland, Russia and Norway.

2. POLAR BEARS ARE THE UNDISPUTED KING OF THE ARCTIC
Polar Bears are regarded as apex predators as they have no natural predators and are top of the food chain in the Arctic. Male polar bears can weigh up to 800kg, as much as 10 men, and are twice the size of females. This, in addition to the fact that they can measure up to 3 metres long, makes polar bears the largest bear species and the largest land carnivore in the world. Big, strong and powerful, no other animal dares rival the Polar Bear – the true king of the Arctic.

3. POLAR BEARS ARE ACTUALLY BLACK, NOT WHITE.
Polar bear fur is translucent, and only appears white because it reflects visible light, and it allows them to camouflage into their environment. Beneath all that thick fur, their skin is jet black, which helps them soak up the sun’s rays and keep warm.

4. POLAR BEARS CAN SWIM CONSTANTLY FOR DAYS AT A TIME
Polar bears can swim at speeds of up to 6mph in the water and have been recorded swimming for nearly 10 days at a time and traveling up to 427 miles (687 kilometres) in a single swim without stopping to rest. They use their large paws that are specially adapted for swimming to paddle through the water while holding their hind legs flat like a rudder.

5. POLAR BEARS HAVE MORE PROBLEMS WITH HEAT THAN THEY DO WITH THE COLD
Polar bears have more problems with overheating than they do with being cold – they are specially adapted to their environment have 2 layers of fur that prevent almost all heat loss in the freezing temperatures. That’s why they typically walk at a slow pace – they can run for a short distance, as fast a racehorse, but quickly overheat!

6. POLAR BEARS CAN SMELL THEIR PREY AS MUCH AS 20 MILES AWAY
Polar bears have an incredible sense of smell which they use to find food. They can smell a seal that is up to 20 miles away and they can even smell a seal hidden 3 feet below the ice from nearly a mile away! This is very handy as polar bears often hunt by waiting for seals to breathe at the breathing holes in the ice. They locate them with their powerful sense of smell and wait for the seals to emerge. Polar bears have to be smart and patient because the wait can be long—sometimes hours, or even days.

7. BABY POLAR BEARS WEIGH THE SAME AS A GUINEA PIG
Pregnant polar bears build snow dens where they give birth and care for their young cubs for the first few months of their lives, protected from the harsh Arctic environment. The mother does not feed during this time and can go up to 8 months without food – the longest deprivation time of any mammal. At birth, the cubs are only around 30cm long and weigh around half a kilogram – that’s about the same as a guinea pig!

8. POLAR BEARS FACE MORE THREATS THAN CLIMATE CHANGE
There are only about 26,000 polar bears living in the wild, according to the IUCN. However, estimating the number of polar bears is difficult because they live in such remote habitats at low densities, and information about their subpopulations is often poor or outdated. Polar bears are listed on the U.S. Endangered Species List as threatened and are protected under the Marine Mammal Protection Act.
While climate change remains the greatest threat to the polar bear’s survival, that is not all that the predator is up against. Other challenges to the bears include increased commercial activities, conflicts with people, pollution, disease, inadequate habitat protection (of denning and seasonal resting areas), and the potential for over-harvest in smaller or declining polar bear populations.
At National Geographic Expeditions all our cruises are carefully crafted to minimize any disturbance to fragile natural and cultural resources. An environmental impact assessment is made by our experts for cruises in sensitive regions and our passengers are supervised by onboard guides, who explain important considerations when encountering local flora, fauna and populations.

9. SCIENTISTS CAN EXTRACT POLAR BEAR DNA FROM JUST THEIR FOOTPRINTS
An innovative new technique developed by WWF and DNA specialist firm SPYGEN allows scientists to isolate DNA from a polar bear’s footprint in the snow. Two tiny scoops of snow from a polar bear track revealed not just the DNA of the polar bear that made it, but even from a seal it had recently eaten!

10. GRIZZLY-POLAR BEAR HYBRIDS EXIST
As recently as 2006, genetic testing confirmed the existence of polar bear-grizzly bear hybrids, also known as ‘grolar bears’ or ‘pizzly bears’. As the world warms and Arctic Sea ice thins, polar bears are being driven ever further south, where they meet grizzlies, whose ranges are expanding northwards. And with that growing contact between the two species comes more mating, and therefore increased sightings of their hybrid offspring. The hybrid physically resembles an intermediate between the two species, but as wild hybrids are usually birthed from polar bear mothers they are raised and behave like polar bears. The ability for polar bears and grizzly bears to interbreed is unsurprising when you consider that polar bears evolved from brown bears as recently as 150,000 years ago!

While you can never guarantee to see one or more of these majestic beasts, travelling with our experienced Expedition team and our National Geographic Experts who know the land and their favourite spots, you have the best possible chance!
Find out more about our Arctic adventures here