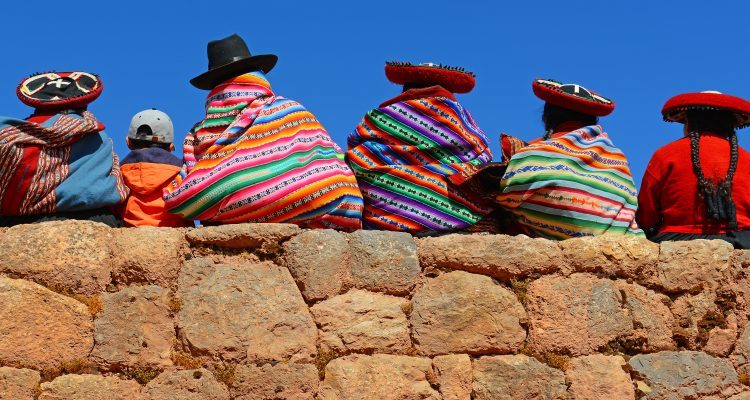 Head to this landlocked South American country for an array of one-of-a-kind adventures.

Ascend to the world’s highest capital city, La Paz, perched a dizzying 11,942 feet above sea level. An intricate cable-car system connects residents to the city centre of Bolivia’s administrative capital (Sucre is the official capital, at a still impressive 9,153 feet). The social hierarchy here manifests in converse, with the most affluent neighbourhoods laying claim to the city’s lowest reaches.

Maybe it’s the altitude: La Paz is home to some seriously quirky customs. November 8 is known among Bolivia’s second-largest indigenous group, the Aymara, as Day of the Ñatitas, in which revellers shove everything from coca leaves to cigarettes into human skulls adorned with flower crowns. La Paz is also known for a lineup of crossing guards dressed like zebras, dispatched to help pedestrians safely navigate the city’s streets; and a government clock overlooking the main square and dialled to run backwards—a “clock of the South” that serves as a reminder to both treasure Bolivian heritage and think creatively.

Get Charged Up on Lithium Reserves

Bolivia’s most unique landscape is the Salar de Uyuni—a salt desert spanning some 4,000 square miles and containing a whopping estimated 10 billion tons of salt. So vast it can be seen from space, the endless plain dazzles visitors with its brilliant white vistas. Underneath all that surface-level emptiness is the world’s largest lithium deposit—estimated at 50 to 70 per cent of the planet’s total supply of the rare mineral.

Become One with the Landscape

Take some time to reflect as you gaze out across the world’s largest natural mirror—a trick of the eye that happens when a thin layer of crystalline water tops the salt flats at Salar de Uyuni. The mirror effect only occurs during the rainy season, typically from December to April, and sets the stage for spectacular photographs.

Get Keen on Quinoa

Dig into locally grown quinoa—the ancient superfood that has taken the health world by storm over the past decade—and, if you dare, sample local delicacies such as guinea pig and dried llama meat made into jerky using an ancestral technique. Another indigenous tradition to try is chuño, an old Andean method of naturally freeze-drying potatoes that involves stomping on spuds with bare feet to squeeze out the moisture.

Eavesdrop on a Symphony of Local Languages

Some 40 to 50 per cent of Bolivians speak an indigenous language as their mother tongue, and Bolivia’s constitution declares 40 official languages—Spanish plus 39 indigenous languages, ranging from a few that are considered extinct to three new additions in 2019. Hear the most prevalent of these dialects, Quechua and Aymara, in Andean villages as well as in city markets.

Go Off the Beaten Track

Pay your respects to a bygone local industry—and fill your Instagram feed—at a train cemetery in windswept southwest Bolivia. Near the popular Uyuni salt flats is this manmade marvel: an evocative junkyard for dozens of old graffiti-strewn steam trains from the rail and mining boom of the late 19th and early 20th century. Decades of salt-laden winds have rusted out these abandoned relics.

Walk on the Moon Valley, an otherworldly maze of canyons and spires outside of La Paz. Amid the surreal vistas of this heavily eroded landscape, keep an eye out for several cactus species native to the Andes, including the hallucinogenic Choma, or San Pedro cactus.

Seek out the abundant biodiversity of the country’s incredible range of ecosystems, ranging from the Andes mountains to the Amazon Rainforest and the Chaco dry forests. More than 1,400 bird species, including regal Andean condors and vibrantly hued macaws, flutter through the air here, as do more than 3,000 species of butterflies. There are also thousands of delicate orchid species and hundreds of cacti species big and small. Flamingos flock to the lakes and lagoons of the Andean plateau, while the endemic pink dolphin glides through the rivers of the Bolivian Amazon.

Gaze Up at a Veritable Mountain of Money

The sky-high city of Potosí—situated 13,290 feet above sea level—sits in the relative shadow of Cerro Rico, or Rich Mountain. Local lore alleges that the lofty peak is made of silver, and there’s no disputing the fact that the mountain’s silver ore deposits funded the colonial Spanish Empire in the 17th century. Potosí was once so closely aligned with wealth that it inspired an old saying: “to be worth a Potosí” or a fortune. Visitors can step foot in the historic silver mint, called the Casa Nacional de la Moneda (House of Money), which has also served as a prison, a fortress, and an army headquarters.

Get introduced to Bolivia on an 8-day trip with National Geographic Journeys, offered in partnership with G Adventures.